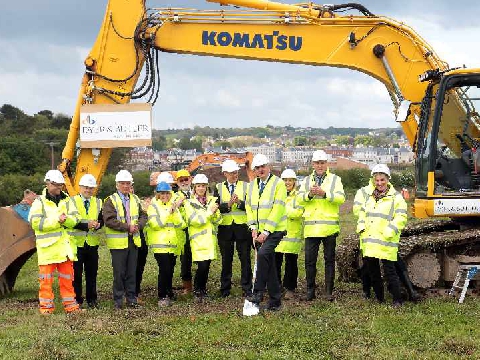 It's to develop the main road to the Deep Lane junction

A turf cutting was held on Thursday 9th of May to mark the start of work on the Devon County Council scheme, and South West Devon MP Gary Streeter was among those supporting the ceremonial event.

The scheme will construct a new, direct link from Sherford, through the development and connecting to the A38 Deep Lane Junction that was upgraded in 2017.

Contractor Dyer and Butler will carry out the work which is due to be completed by Summer 2020.

Devon County Council Leader John Hart said: “The development of Main Street is a key access route to the new community of Sherford. We’re delivering it in the early stages of Sherford to make sure the infrastructure is built upfront and doesn’t put pressure on the existing rural road network. This road is being built as a collaborative project, working closely with the Sherford Consortium, with funding from the Department for Transport.”

Sherford will eventually be home to over 12,000 people, three schools including a secondary school, high street and business park. Over 220 homes in Sherford are already occupied.

The Sherford Consortium has delivered the first public section of Main Street, at the Elburton end.

Malcolm Gilmore, from the Sherford Consortium, said: “As the main arterial road through Sherford, Main Street will be a huge milestone for this new community and we look forward to work starting. This is a major piece of infrastructure, making it easier for residents - both now and in the future - to travel through Sherford, access the A38, have a greater choice of routes and be better connected to the surrounding area.”

South Hams District Council’s Chief Executive, Sophie Hosking, said: “I am thrilled that the building of Sherford’s Main Street is underway.  It is central to the needs of both the existing, and developing, community that infrastructure is delivered. This is another huge step towards realising the vision of Sherford.”

While new junctions off the road are being constructed, some of the nearby roads will be closed to protect the safety of the travelling public as well as staff working on site.

Official diversion routes will be signed to direct all traffic, particularly larger vehicles, onto similar or higher classification roads. However, it’s likely that local traffic may find alternative routes and surrounding roads may experience higher levels of traffic than usual.

Construction traffic will use the A38 (eastbound and westbound) and will access the work site through the Deep Lane Junction, off Ridge Road.

More information on closures and planned traffic management can be found HERE or EMAIL.