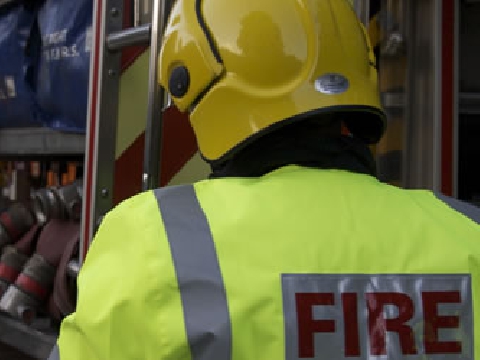 One fire appliance was originally sent to a report of black smoke in the area of Harwell street but unsure of what was causing it. Very quickly after the initial call, further calls confirmed this was a property on fire and two additional fire engines and an officer were sent on to also attend.

When crews arrived they said this end terrace property consisting of three floors measuring approximately 4m by 6m was found to have a fire in the kitchen on the ground floor and got to work using 4 breathing apparatus sets and 2 hose reel jets. At this stage crews could not confirm all persons were accounted for.

00:22 The fire in the kitchen was now out. One adult male was evacuated from the property prior to the arrival of the fire service and a further male and female from the neighbouring property were also treated for smoke inhalation by the fire service and then checked by ambulance crews who attended the scene. A thermal imaging camera and  positive pressure ventilation fan were also in use and all persons were now accounted for.

01:09 75% of the ground floor was damaged by fire and 70% of the first floor. One adult male from the property was taken to hospital by ambulance crews for smoke inhalation. Crews were still in attendance with fire investigation and they were cutting away and dampening down.

03:02 All fire service resources have left the incident.