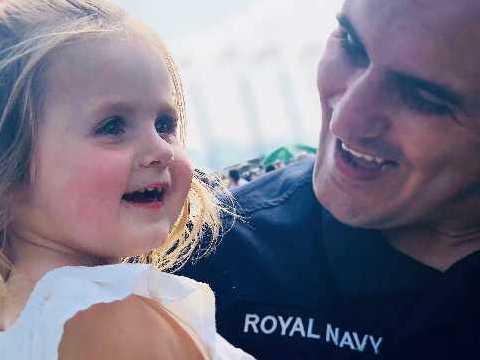 One of the winners, Evie Robson (2) pictured with her dad

Four children from Plymouth have been chosen from hundreds of entries to feature in a national charity calendar which will raise money to support children whose parents are serving in the British Armed Forces.

20-month-old Eleanor Owen, two-year-old Evie Robson, three-year-old Georgia Baring and seven-year-old Neave Walsh all have parents serving in the Royal Navy and will appear in the Little Troopers Military Moments 2020 calendar in a series of heart-warming photos that capture special moments from British Armed Forces families.

Evie Robson is pictured with her Daddy, PO Marc Robson, on the Plymouth Hoe on Armed Forces Day.

Evie's mum, Carly Robson, comments: "The photo was such a beautiful moment between father and daughter having a cuddle together after she missed him at work.

"It is definitely hard having a husband who works away for long periods of time. Having an amazing bond with the girls is very important and moments like this are extremely special. Little Troopers is a fantastic organisation. It can be so tough when your partner deploys so any help to make it easier on the girls is appreciated more than anything."

Eleanor's mum, PO Laura Owen, also serves with the Royal Navy on HMS Drake. She comments: "We are very happy to have been chosen to be included in the Little Troopers calendar to help raise money for such an important cause.

"As James and I are both serving, the times we spend altogether as a family are very important and moments like the one shown in the picture are very special to us."

Neave Walsh is pictured helping her Mum, LET WE Claire Walsh, on HMS Albion while wearing a mini Royal Navy uniform that was made for her to wear while Claire was serving away as she was missing her Mum so much.

Neave's mum Hayley, comments: "We're absolutely honoured to be part of the calendar for such a fantastic charity.

"Living the majority of their lives apart Neave enjoys spending time on board with Claire whilst the ship is in Plymouth. This is so she can feel like she has a role in Navy just like Mummy, and try to share some of the ship's day-to-day experiences together to create those important memories. Little Troopers are adding to those memories with experiences like this one."

Georgia Rae Baring, is pictured at just six-days-old. Georgia's Daddy, PO Graham Baring, was in the middle of a nine-month deployment when Georgia was born and flew home for her birth before flying back to complete his tour just six weeks later.

Mum, Zoë Baring, comments: "I'm so excited and proud that this image has been chosen for the calendar. It encapsulates how our world changed overnight and the role that the Royal Navy plays in balancing work and family life. It was part of a range of images that Graham was able to take away with him and have next to his bed to look at whilst away and missing his newborn daughter."

Little Troopers founder; army veteran and military parent, Louise Fetigan, explains: "We are delighted that so many Royal Navy families in Plymouth submitted images for our calendar.

"All of the images encapsulate the special bond that military children have with their serving parents.

"One of the biggest challenges military children face is being regularly separated from their serving parent for long periods, at unpredictable times and sometimes at very short notice. That's why Little Troopers exists, to champion and support all our military children, whatever forces life sends their way."

The 'Military Moments' 2020 calendar is now on sale, costing £7.50, with all proceeds helping Little Troopers to continue providing fundamental resources and initiatives to support military children such as the Little Troopers Treasures story time app and Little Troopers Separation Pack.

We caught up with Evie Robson's mum, Carly: